Techniques in this group use specific processor instructions to either get particular information about CPU — or execute predefined instruction sequence which behaves differently in usual host OS and in virtual environment.

The CPUID instruction is an instruction that returns processor identification and feature information to EBX, ECX, EDX. The information received to these registers can be used to identify a vendor.

2. Check if being run in Hypervisor via CPUID instruction

An other way to detect if the program is being run in hypervisor is using the CPUID instruction in an other way.

When EAX is set to 1, the 31st bit in ECX (CPUID’s returned value) is set, it indicates that the program is being run in Hypervisor.

This technique doesn’t work on latest VMware releases (all Windows releases affected). However, it is described here for the sake of completeness.

This trick involves looking at the pointers to critical operating system tables that are typically relocated on a virtual machine. It’s what called “Red Pill” and was first introduced by Joanna Rutkowska.

On real machines the IDT, for example, is located lower in memory than it is on guest (i.e., virtual) machines.

This technique is described by this link (slide #37).

MMX instructions may be used as random instructions by malware. Sometimes such subsets of CPU instruction are not supported by emulators and thus exception is thrown instead of performing analysis. 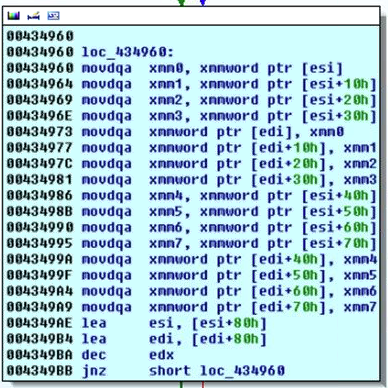 5. Detecting environment via execution of illegal instructions (VirtualPC only)

The malware executes illegal instructions, which should generate exception on the real CPU but are executed normally - or in some different way - in virtual environment.

Information about CPU exceptions is provided by this link.

It should be emphasized that there are more than 1,000 combinations of

bytes that may be used by malware in order to detect VirtualPC enviroment.

6. Detecting environment via IN instruction - backdoor port (VMware only)

This article explains why backdoor port communication is used in VMware in the first place.

No signature recommendations are provided for this evasion group as it’s hard to track such a code being executed.

Patch hypervisor. If it proves impossible — due to license issues or something else — patch VM config. Usually undocumented options help.

Credits go to open-source project from where code samples were taken and to independent researcher who shared his findings:

Though Check Point tool InviZzzible has them all implemented, due to modular structure of the code it would require more space to show a code sample from this tool for the same purposes. That’s why we’ve decided to use other great open-source projects for examples throughout the encyclopedia.